Somewhere there is a forest of birch trees without roots that walk on bird feet. Maternal wolf-women hide in wait for Little Red Riding Hood, to either eat her or to protect her. In another part of the forest other birch trees walk on hooves amongst mushrooms capped with bird heads. But this is not a magic forest. You will find no faeries here, no dryads or sylphs, no dragons flying overhead or wizards smoking hashish under a rainbow bridge. There is something oddly alchemical about these birch trees and mushrooms, as if they were constructed by a potent blend of forbidden knowledge and advanced genetic science. And the wolf-women that haunt them might know more about what’s going on than one might think. 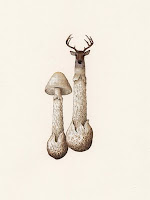 Amy Ross, the artist of these strange and bizarre worlds admits that her own body is the model for the naked lower torso of these lupine/human cross breeds. These creatures are a departure, though, from the main body of her work: animals morphed with branches, mushrooms, berries, and blossoms, forming implausible hybrid creatures. Her collage, graphite and watercolor paper creations form a collection not unlike early botanicals, except in her natural history goat heads emerge from near-bursting berries and fruits, which are endowed with teats that feed other fruit-housed creatures nearby.

So where does Ross’s doppelganger exist in her earlier work, which is devoid of any human imagery? Well, despite the lack of obvious human elements, Ross’s hand exists in the very nature of her drawings and watercolors, which always suggest works-in-progress. There is a deliberate unfinished quality to them, like the best scientific research, that continually build on past successes (and errors) to further push the boundaries of those trials. But in Ross’s experiments, any result is worthwhile, sometimes the more grotesque the better. Ross exists as an immediate presence behind a drawing of piglets suckling on their fungal-pig mother. Hers is the scalpel performing these bizarre surgeries and implantations at the moment one is looking at the images.

While Ross’s work plays with the intersection between art and science, there is another component that is equally fundamental. The tradition of the 18th and 19th century naturalist and natural philosopher was the precursor to Ross—where science, art, and speculation all worked together to discover and catalog all the wonders, and oddities, of the natural world. The material expression of this came in the form of botanical and zoological illustrations, and was even part of the impetus behind the Wunderkammer, 17th century cabinet of curiosity. The Wunderkammer was an attempt to catalog and collect all the wonders of the known world. Works of art, shells and minerals, plant and animal specimens, and even objects that blurred into the mythic (e.g. unicorn horns) were housed in private rooms by wealthy naturalists and aristocrats. Modern science has replaced the curious with the rigor of scientific investigation, and the modern museum houses the rest of what was once only for the rich and their patrons. 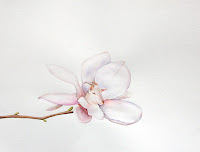 Ross’s whole body of work exists as a modern Wunderkammer, a room that houses both the real and the fantastic. In one watercolor, a goat head emerges from the center of a flower. The flower itself could easily be mistaken for an image from a early botanical--the precision of its rendering gives it scientific value. The goat in the center is almost shocking, and while it seems content, one can’t but help feel sorry for the creature. How much of its own goatness had to be lost or removed for it to exist as a mere extension of the flower’s identity? In a Wunderkammer, the problem was the same. What happens to the identity of natural specimens, no matter how strange, when coupled or presented next to things that simply do not really exist? Ross’s work often moves from being simply a naturalist of the improbable to a mad scientist. This will mean that her hybrid creatures will not be naturally-occurring anomalies (such as a mushroom with a calf’s legs and feet) but rather human created monsters, which might potentially mutate and wreak havoc.

There is of course, one other primary influence. That of religion and its myths. Even as Ross moves further into the realms of science gone amok, the religious metaphors for her work can be startling. The golem, for example, haunts the very edges of almost everything Ross has done. In that story, a rabbi constructs a man out of clay, and by using the hidden names of God, imbues it with life. Both a representation of human beings, but also a grotesque mimicry of humanity, the golem eventually turns on his creator and the rabbi is forced to erase the divine name from the creature’s forehead, turning it back into a heap of clay. In some versions of the story, the golem had grown so large that when it crumbles, it crushes the rabbi under the weight of its rubble. While Ross’s creations are delicate lambs and birds fused with even more delicate plants and mushrooms, they are an attempt to create new life where it had not previously existed. Is this something that should be left to God alone? Ross’s work does not answer that ancient questions, but only reveals how human that impulse is. Isn’t this how we are most like our creator, her work insists, to want to form something out of the void, and then to see how malleable nature is?
Posted by Peter Bebergal at 4:46 PM