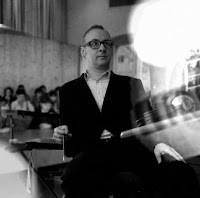 (Note: This is an interview from 2009. I was inspired to repost it in honor of the new Listening Center Study Series album featuring Pye Corner Audio [thanks to Raven Sings the Blues]).

The British record label Ghost Box is something akin to a Wunderkammer, a cabinet of curiosities that contains things both fictive and real. But their proximity to each other makes it near impossible to sort out what is of the phenomenal world and what is inexplicable. Ghost Box (started by Jim Jupp and Julian House) is home to a number of remarkable musical groups, including Belbury Poly, The Focus Group, Advisory Circle, and Roj. Jim Jupp was kind enough to answer some questions about his work.

Your music plays with ideas of technological decay and natural technologies; the past haunting the future, the future finding its way back to infiltrate the past. What is about that tension that is so compelling as an artist?

You've hit on something there that I think we feel is an essential part of the labels aesthetic. Amongst the ideas that interested us when we started the label were EVP and the spiritualistic leanings of Jon Logie Baird and also Thomas Edison. There's something magical and plausible about that area where technology and spiritualism overlap.


Similarly we love the weirdness of the juxtaposition of ancient and modern, or the cosmic and the parochial. This is a common motif of British science fiction. In a John Wyndham novel, or a Nigel Kneale screenplay you will often find an archetypal English village where suddenly weird cosmic events break in, or a new technology will open up access to forbidden and ancient knowledge. Don't know if its known at all in the states but Nigel Kneale the creator of Quartermass wrote a one off "ghost story" drama for British TV in the 70s called The Stone Tape. In it a group of scientists trying to make a breakthrough in a new recording medium to replace tape realised that stone themselves store up a psychic imprint of events and sometimes replay them as ghosts. Its just the kind of thing that's a real touch stone for Ghost Box.


I imagine growing up, were you an avid reader. What were the books that shaped you and maybe even continue to find their way into your music?

I've know Julian [House] since we were kids in school together and in our late teens we both got obsessive about HP Lovecraft and this opened up the floodgates to a whole world of weird, cosmic fiction by the likes of Arthur Machen and Algernon Blackwood. As well as that particular strain of British science fiction I mentioned before, the work of John Cowper Powys has been an influence. More heavyweight and literary than the supernatural fiction that feeds into the Ghost Box world -  he explored the mysticism and romance inherent in the landscape and nature of the British Isles.

Although having said all that we don't pretend to be steeped in literature and television and film are perhaps more important influences. Old Hammer Horror films, MR James dramatizations  (in the UK there used to be a ghost story , usually MR James, broadcast more or less very year on Christmas Eve during the seventies), supernatural children's TV dramas from the 60s and 70s (maybe not known outside the UK at all ??) like The Owl Service, Sky or Children of the Stones.

What is interesting about these authors is that while some of them (Lovecraft and Machen in particular) are sometimes believed to have actually mapped out certain supernatural locales, I would argue their real legacy mapping aspects of the human psyche.

One of the appealing aspects of Lovecraft is the way he achieves a sense of plausibility and continuity in his fictional worlds with hints at mythology, books and fabricated history. I believe its called hyperstition - the notion that a fictional reality becomes more believable if ideas , names, references and images are shared across a number of different works, even by different artists. It's partly what we've done in Ghost Box, there's little hints to a local dialect and history to Belbury spread across each of our releases - only small incidental things but they seem to give the fiction more solidity.

Machen also created his own mythologies and mixed them with genuine history and myth to make his world more tangible. Also there's a more personal connection  for Julian and I, because much of his fiction is set in the exact part of South Wales where we grew up. So there's that psychogeographical idea that both the fiction and the real locales are enhanced if your familiar with both.


Would you say your music is more "psychological" than spiritual or occult?

Actually I'd say it was more an occult process - if accidentally. As I understand it magic is about trying to realise imagined worlds through creative effort and will. I'm talking about a more poetic idea of the occult - There's no nudity and incense though, we're far too up tight and cynical for all that business.

The music on your label seems intent on shifting or even altering the consciousness of the listener. Is the listener's "state" something you consider?

I think this is always in the mind of anyone composing instrumental electronic music. Julian in particular sees his Focus Group work as am extension of his visual collage work, and I know that he shares the view of the surrealists that collage is a way of access the alternate worlds of the unconscious. Roj's work for us I think is more directly psychedelic and I think his album is a beautiful, immerse and disorientating experience. My own work as Belbury Poly and perhaps Jon Brook's work as the The Advisory Circle I think plays with the idea of false memory and that sense of hard to place familiarity.

When I was a kid in the US, there was always something exotic and strange about British horror that made its way here, particularly the Quatermass stuff. Americans culture is fairly young, whereas the horrors that lurk in the English countryside can be ancient. Do you find British listeners are more attuned to this deeper sense of the macabre?

I'm not so sure. Again I think of how Machen and Lovecraft both found something weird and ancient in their respective landscapes.  When we started we never thought our stuff would appeal to much of an audience outside of the UK. But I think we now have more listeners in the states than anywhere else.

History is very much in your face as it were in this country. Anyone can dig a hole in the back garden and find medieval coins and Roman pot shards. Bizarrely, one of the longest running weekend family TV shows here is called "Time Team," a kind of weekly archaeological dig against the clock. British people love all this stuff but the flipside is that tourism here is based on a fanciful romanticised version of the past and sometimes it seems the whole country could become a kind of giant heritage theme park with little gift shops repackaging history as Henry VIII tea towels and nasty Celtic knot-work jewelry. This is partly what we explored with the CD booklet for the Owl's Map album.

I suppose our references do seem otherworldly and foreign to non British listeners. I think part of the appeal may be the stereotype of British eccentric boffins locked away in garden sheds tinkering away with strange experiments. Like Dr Who. or the now  laughable British space projects in the Quatermass films. You suspect those astronauts wore tweeds under the silver suits and thought nothing of smoking pipes in their space capsules.

I just listened to Roj's new album [The Transactional Dharma of Roj] and one thing I was struck by was how all this cultural detritus can be made into something so original. How much of that is a result of the studio work and how much the artist's vision?

In Roj's case its his vision plus the result of the way he works and the tools he uses. Roj lectures in electronic music and understands and uses all of the techniques of the last 40 yrs of the genre in his work. There's lots of tape processing, tape loop splicing, analogue synthesis, experimental acoustic recording techniques and digital editing and post production too.  Its a well worn cliche about lots of things but I really think his work is timeless - its very hard to anchor his sound to  a particular point in time.

We live in an incredible time to be awash in so much cultural history, particularly music, which often sounds like a catalog of what happened before rather than an attempt to pave new ground. How do you ensure what you do isn't just hagiography?

The questions we are all most commonly asked are, is what we do nostalgia? How do we avoid it being nostalgia? How is it different from nostalgia? Well there is clearly a big dollop of nostalgia in what we do, we're steeped in music of 30 to 40 years ago and we love its sounds, textures and technologies. But what I think we're trying to do in Ghost Box is convey a sense of nostalgia for an imagined past. Either that or we're imagining the sounds and imagery of a parallel world where time is not so important and all these things are current all at once.

I would guess you are collector of "things." Any particular obsession these days?

Do you see Ghost Box branching out in any interesting ways?

For years now we've been discussing the possibilities of putting a book together along the lines of The Folklore and Mathematics booklet we did a couple of years ago. So I'm hoping that becomes a reality before long. Julian recently did a Ghost Box gallery event in Stirling in Scotland with installations, prints and video, I think we'd like to explore more of that kind of a stuff in the future. Loads of things really its just a problem of finding the time to get the things off the ground.

What are you listening to these days that is not your label?

I'm no Luddite but I've always love the warmth and tactile nature of analogue technology. So both at the same time is good for me. As for Vinyl or CD, I guess if both are becoming obsolete I'd rather cling on to the vinyl.

Thanks so much. Let me know if you are ever in the US and coming to Boston.

Will do.  I'm told Boston is a great city and I've often thought about a trip to see some of HP Lovecraft's New England if it still exists,
Posted by Peter Bebergal at 10:00 AM